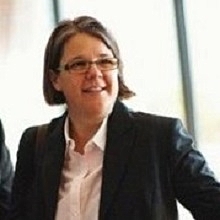 Gina VanderLoop is President at ROI Solutions. Gina has an extensive background working directly in the non-profit sector since 1986 – combined with extensive knowledge and experience in technology. Gina worked as Director of Development for the Nobel Peace Prize winning organizations International Physicians for the Prevention of Nuclear War (IPPNW) and Physicians for Human Rights (PHR). At IPPNW, Gina’s work centered on establishing major and individual giving programs for the organization ranging from direct marketing tactics to personal solicitations as well as undertaking international fundraising efforts working with IPPNW affiliates in Sweden, Germany and the United Kingdom. At PHR, Gina took the organization from deficit funding to over $1M in revenue in her very first year working with the organization. These fundraising increases came from a variety of sources: foundation giving; the establishment of individual giving programs that encompassed membership; annual giving through direct marketing; fundraising events; and the organization’s first-ever major gifts program (including a successful Planned Giving Program with gifts through Appreciated Securities and Bequests). Back in her organizing days, just out of college, Gina was Regional Director for INFACT (now Corporate Accountability International) and ran both the Upper Midwest and New England Campaign Centers and led “national organizer training sessions” for incoming new organizing staff training as many as 10-12 organizers per session over a 2 month period. There, she helped launch and lead national campaigns for the organization. Under her direction, both campaign centers tripled their staffing, activist base and fundraising base.