At the recent DMAW annual meeting, attendees got to hear the inside story behind the ALS Ice Bucket Challenge (IBC). And, what an inside story it was.

Did you know that the idea began with three young men, all with ALS, who played sports and decided it was time to get people to understand ALS? The goal was to reframe ALS among their age group, mainly because Lou Gehrig who is connected to ALS among the baby boomer generation is not recognizable among the younger cohort. Amazingly, although multi-millions were raised through the IBC, it did not start as a fundraising effort, but rather as an awareness campaign. 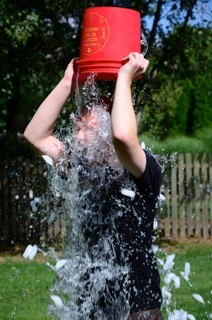 My favorite quote of the night was the reference to the campaign being “peer-to-peer on steroids.” I personally was expecting that the gifts ALS received would be low. However, the gifts were not transactional in nature and ranged anywhere from $50 to $500 to $5,000 — and, even a $100,000 gift.

So, I’m sure you want to know the overall achievement … get ready because this is even more impressive:

And, of course, there were lessons learned:

I got to speak to the presenters at the end of the evening and I had to ask about the “secret sauce.” Their immediate response was three-fold, the campaign was easy, compelling and fun. For me, though, I also found the campaign disruptive. I remember looking at my FB news feed and seeing post after post of folks dumping water over their heads. Before I really understood what was going on, I had probably seen over 100 posts related to IBC. It certainly disrupted the posts that I normally see. And, in reflecting back on these posts, they were definitely more striking than the usual photos, game invites, status updates and the like – perhaps, there is a great message here about substance still mattering.

The DMAW annual meeting never disappoints so I encourage anyone who didn’t attend to be sure to be there next year. The topics are always insightful, sometimes controversial but never fail to educate.

See you next year, then!